Cadena.
Just her name evokes visions of a cool chick, free spirit, friend you want to be.
But when I think of Cadena, I think of master of the sea.
Years ago, my good friend invited me to a seafood cooking class that was to be taught by someone who had a home delivery seafood business in Santa Barbara.  I was picturing Captain Cook, big man with rough hands and face weathered by the sea.  I walked in to meet Cadena…gorgeous, young woman with soft friendly eyes.  Not the person I envision stabbing a live lobster wielding an enormous chef’s knife!  But appearances can be deceiving.

Cadena grew up around fisherman and lived her life down by the Santa Barbara marina.  She knew the water, she knew boats, she knew fisherman, and she knew her fish.  She taught us to cook Halibut that first cooking class and a delicious sauce for any white fish (shallot olive oil) but most importantly, she cured my fear of cooking mussels.

My Baby Girl loved mussels from a very young age.
Whenever she saw them on a menu, she would immediately order them, fearless of the mess or shells or foraging for crustacian meat.  From there she moved on to Cippino and Boulabaisse and cracked crab.  Baby Girl just loves her seafood, all seafood, but I think mussels still top the list.  I, however, was afraid.  I didn’t know how or where to buy them.  I didn’t know how to clean or cook them.  I didn’t want to poison my family with bad mussels.  And then Cadena came along.  One cooking class later and I was hooked.  I ordered mussels, and more mussels, and even more mussels.  Mussels are cheap and abundant and tasty. They are easy to cook and they are very impressive to serve!

I started with Cadena’s basic method for cooking the mussels and I quickly progressed from there to Thai.  I always thought mussels were being underutilized when served with a garlic wine broth.  To me, the meaty flavor of the mussels just screams Thai sauce.  I adapted my curry chicken sauce to mussels and it was a home run hit with the family.  They requested them over and over during mussel season, which happens to be nearly year-round.  So when I was asked to serve a first course at a Christmas Eve dinner, Thai Mussels was it.

Christmas Eve used to always be in Australia.  From the time we moved there in 1993 until about 2006, we spent every Christmas holiday in Australia.  Then One and Only Son got serious about soccer and serious soccer was played during December so we decided to stay home for Christmas.  That first year home we wanted to do something fun, make it different, start a new tradition, but Christmas is a funny holiday.  People usually think you will have plans for major holidays, or your kids won’t want to be at someone else’s house, or they don’t want to be vulnerable and admit that they don’t have an amazing family tradition themselves.  But my friend Daryl (of Daryl’s Delicious Cookies) didn’t think any of those things.  Daryl wanted to do something fun and different too, something that kids of all ages would like and would make the holiday festive and fun.   Daryl asked us to join them for a Christmas Eve white elephant gift exchange and formal dinner.  She invited four families and each family brought the number of wrapped gifts as people in their family and one course for dinner.

Daryl had the right idea.  We were greeted by an enormous Christmas tree covered in ornaments to really make us feel the holiday spirit.  We were all dressed up and sat at beautiful formal tables but each family served a course, allowing everyone to participate.  And the gift exchange, an event centered more on the fun and laughter of trading and stealing gifts than on the gifts themselves, put the spirit of Christmas in all of us, young and old.  The new tradition survived and I have brought different first courses over the years, but in recent years it keeps coming back to the Thai Mussels which seem to have grabbed hold of the tradition and secured their place for years to come. 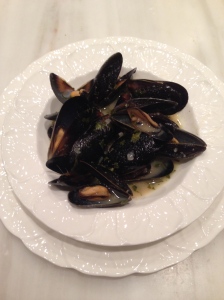 “There is no ideal Christmas; only the one Christmas you decide to make as a reflection of your values, desires, affections, traditions.” – Bill McKibben

The mussels are attached in the ocean by a thing that looks like algae growing.  Clean the mussels by pulling that thing off (it may take a bit of effort) and rinsing off any grit.  Lay out on towels to dry while you make the sauce.  This should not be done too far ahead of time.  Ocean animals do not like tap water so refrain from cleaning until ready to cook. Mussels should be kept well chilled on ice in refrigerator (but not “in” ice which melts into water) until ready to use.

Combine coconut milk and curry paste in large pot.  Bring to simmer and stir well.
Add vegetable broth, fish sauce and sugar.  Heat until sugar combines and turn off heat.
Stir in lime juice, basil and cilantro and set aside.

When ready to serve, heat your thai sauce on low and heat separate large pan to medium high heat.  Add oil to empty pan.
Dump mussels into oil, being careful not to let the hot oil splatter.  Saute about 3 minutes.
Add wine and shallots, stir well and leave to simmer, watching mussels open.  As they open, pull out with tongs and move to pot with thai sauce.  Continue to stir around mussels as you transfer them to the second pot.
When all the mussels are moved (discard any that don’t open) pour remaining liquid and shallots over mussels and mix together well.  Serve immediately.

*You can decide your own heat quotient.  This is the minimum I would use and would use up to 2 T of green paste depending on the brand.  Some are hotter than others.