Sometimes your children surprise you.  They say something and you look at them thinking, “Who are you and what have you done with my child?”

That is exactly what happened in late 2010 when Firstborn Daughter said she wanted to talk to me about her 21st birthday.  I had been anticipating this conversation for years because Firstborn Daughter is an extrovert to the extreme.  There is not a person she won’t talk to and not a party she won’t attend.  She sent me a card for my birthday that year, knowing how much it would remind me of her.  It was covered in gold sparkles and quoted “One Cannot Have Too Large A Party.”  So when I say I was anticipating the conversation about her 21st birthday, I was actually dreading it. 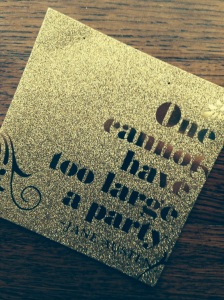 She said, “I now have two friends my age who have been diagnosed with cancer.  I have an idea to raise money for others with a goal that I would reach by my 21st birthday. ”  After I picked myself up off the floor and was able to respond positively without too much incredulousness and without flat out crying at her beauty, I listened to her idea.  It was of course, brilliant.

“I want to design a bracelet.  But not an ugly rubber one like those that millions of people buy.  I want to design something fashionable and simple and sell it for $21 so it is still affordable but people would actually want to wear it.  I would partner with a nonprofit so people could donate the money to the charity.  I would ask everyone to buy them instead of giving me a birthday present this year.”

I loved her idea and after excitedly talking about how she could get started, I asked what her goal was.  I was thinking $1,000 or even $5,000 was doable and was an admirable goal.  Without a pause she said, “I want to raise $21,000.”  Wow.  That’s a lot of bracelets.  But there was not a doubt in her mind that she could do it.  And by the end of our conversation, I was almost convinced that she could.

She already had a charity in mind.  She started calling.  And calling.  And emailing.  And calling.  The holidays came and went and she finally got a meeting with someone.  She called me after the meeting feeling dejected.  The charity said they were happy to let her use their name for the campaign, but they could not give her any input, support or promote the bracelets in any way.  They would accept the money that she raised.  It was not the relationship she was hoping for and caused her to second-guess her idea.    As fate would have it, because fate sometimes works in funny ways, one of her friends with cancer died the following week, in January 2011, at age 21.

Firstborn Daughter and I were heartbroken.  Sarah had been diagnosed in high school and had gone in and out of remission for years, allowing her to experience and accomplish amazing things.  She had traveled, given speeches, gone sky diving, visited friends, wrote stories, and attended Stanford University.  We were fortunate to be amongst those friends she visited.  Firstborn Daughter reminisced about Sarah’s visit and the fun they had.  We both laughed about Sarah telling us she got a Mini-Cooper for her birthday.  Sarah said, “Yeah.  My parents NEVER would have gotten me that nice of a car if I didn’t have cancer.”  Sarah knew how to look for The Silver Linings and kept us all laughing while she found them.

Firstborn Daughter said, “I am definitely doing my bracelet campaign.  For Sarah.  I need my 21st birthday to mean something.”  And fate stepped in again.  I was going to a meeting that very night for National Charity League (NCL) because they were introducing us to a nonprofit that NCL would be supporting in the coming year.  It was called Dream Foundation.  And they support the final wishes of terminal adults. (Other organizations only grant to age 18.)  The founder, Thomas Rollerson was speaking that night.  I asked Firstborn Daughter if that charity fit her needs and if I should see if they liked her idea.  “Yes!  What a perfect fit!  I could support the dreams of people who may not even make it to age 21,” was her enthusiastic response.

Everything happens for a reason….
The response from the Dream Foundation founder Thom was “Yes! Yes! Yes!”  I still remember his boyhood excitement over the idea that I could barely get out of my mouth before he responded.  We all knew it was meant to be.  They had just received a dream request that very day for a girl to have a 21st birthday party, which would be the dreamer’s last time to gather with family and friends. I still get chills just thinking about it.

Firstborn Daughter did it.  She took a little idea, and a lot of hard work and compassion, and allowed 21 people to have a final dream come true as her 21st birthday gift to herself.  Her DREAM FOR 21 campaign for Dream Foundation raised over $40,000, one bracelet at a time.  And that isn’t even the end of the story.  Dream Foundation found another compassionate 20-year-old, Annabel, to design a bracelet and support the next campaign.  The dream goes on….you can buy your DREAM FOR 21 bracelet here to support someone’s final dream.  And yes.  It is still just $21.

Dream Foundation, and the amazing generosity of spirit surrounding the organization, has changed my world.  Our whole family supports it, especially Baby Girl who worked tirelessly to help her sister’s campaign and create new youth programs at Dream Foundation.  The enthusiasm of the founder (who is now my good friend) permeates the offices of the foundation.  The staff are warm and caring and friendly.  It is like walking into a big hug each time you enter their offices.  And Thom’s infectious, loving charm makes any day you see him a better day.

Thom and I and our significant others went for a beach walk the other day, followed by cocktails and snacks.  I threw together a pretty little platter with my garden figs to eat while we sat out enjoying the beautiful fall day.  The combination of flavors was delicious.  Looking back at photos of my happy platter of figs warms my heart with the joy of knowing Thom and being part of Dream Foundation.  Life is but a dream.

“One cannot have too large a party.” – Jane Austen

Slice figs crossways to make 1/4 thick rounds.
Top with a healthy crumble of goat cheese
drizzle with jam (warm up for easier drizzling)
grind pepper and sprinkle salt on top