November 4, 2013 · by Cynthia Spivey · in From The Earth - Vegetables, Historical Nonfiction, Show Me The Protein, Spivey Staples, The Main Meal · 6 Comments

In June of 2013, on our way to a weekend in San Francisco, Hubby and I stopped to meet up with my Mom and Sister-in-law and a friend for lunch.  When lunch was over, my Sister-in-law suggested we swing by to see my Brother Bill.  “Naw,” I said.  “We are running short on time.  I’ll catch him next trip.”  About a month later I got a call that Bill had a heart attack and was in Intensive Care at the local hospital.

Bill got lucky.  And so did I.
He happened to be right near the hospital when it happened and the paramedics got him there in time.  I was so glad he was okay.  And boy, did it make me think.  It made me think of how I would have felt if he had died and it made me sad that I hadn’t seen him on that last trip. Feeling grateful for another chance, I hopped in the car and went to see him.

I told Bill I cared that he was still here.  I eased my conscience by hugging him and talking and laughing. We always enjoying catching up but this visit definitely did more for me than it did for him.  And I was still thinking.  Facing death makes you do that, even when it doesn’t happen.

A couple days later, when I was driving back home and still savoring the fact that I was given another chance to connect with my brother, I thought of Dirk.  Dirk was a great friend of mine through high school and the first year of college.  After that, we kind of drifted apart as people did in those days.  There was no Facebook or cell phones to easily keep in touch and with all the moving I did, it was hard for people to find me.  But years after college, Dirk did find me.  He called me in the late 1980s when I was living in New Jersey and he said he was coming my way soon.  We made a plan to get together and I was excited to see my long-lost friend.  But he never called.  I figured his trip changed and he just didn’t get around to calling to tell me.  Long distance and all.  Like I said, no cell phones or internet. 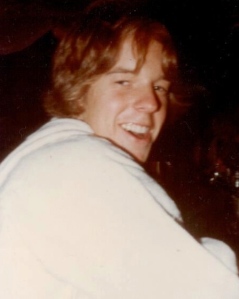 Eight years and five moves later, I ended up living near the town I went to high school.  I ran into an old friend who told me that I should go see Dirk.  He had cancer and didn’t have much time left.  I don’t know why, but I didn’t go.  I guess I didn’t know what to say.  I hadn’t seen him in over 15 years by then and he was dying.  I couldn’t imagine he would want me to visit.

That was many years and many deaths ago and I still often wish I had gone to see Dirk.  I should have gone and laughed about old times and told him he mattered in my life.  I should have said goodbye.  But I didn’t.  And I am sorry for that.

Thankfully, it didn’t happen that way with George.
George and I worked together for a few years in New Jersey.  We worked side by side every day and laughed so much with our third musketeer Neil that they felt like brothers to me.  Then Neil moved away, and I moved away, and I lost touch with both of them.  A few years ago, out of the blue, I got an email from George.  Or maybe it was from Neil.  They were still in touch and one of them had found me on the internet and wanted to know what I was up to.  At first, I thought it was silly to rekindle these friendships.  Both of them lived across the nation, we hadn’t seen each other in decades and it was unlikely we would get together again.  But the email was funny, and it reminded me of our good times so I responded.  We emailed back and forth and the three of us had some exchanges that made me laugh out loud.  Even their Facebook posts reminded me of why we had been such good friends long ago.  Then, about a year after we reconnected, George had a heart attack and died. 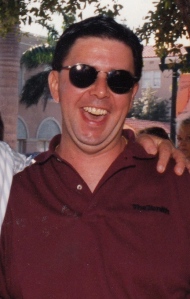 The fact that I had reconnected with George, had those brief exchanges about how our lives had unfolded, made me realize that no connection is pointless.  No moment spent sharing with a friend is meaningless.  It all matters, and sometimes, the memory of a brief last encounter is all we have to hang on to when they are gone.  But with George, in addition to the memories, I also have his stir fry.

George was a great cook.  He loved to have people over and talk about music and movies (his passions) and cook for us.  One time, he made stir fry that tasted just like the chinese take-out that I loved.  Whenever I made stir fry, it just tasted like soggy vegetables in soy sauce.  George taught me the secret is adding the sauce at the end and the corn starch.  Cornstarch takes the liquid and thickens it so it sticks to the vegetables.  I think he also mixed a little sugar in the soy sauce to get just the right amount of sweet and salty.  It changed my stir fry forever. 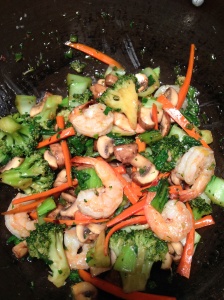 I never got an actual recipe from George.  I just watched him make it.  I have no recollection what vegetables he used because I have made it so many hundreds of times now that I only use what I like to use.  The sauce  also had no recipe because you can use any sauce you like as long as you add the corn starch at the end.  The beauty is in the flexibility.

What makes George’s Stir Fry special is that it is a basic bit of cooking knowledge that was passed on to me by a friend and made a difference to me.  So go forth and stir fry.  And maybe invite over that friend that you haven’t seen in a while and let them know they matter to you.

“I don’t have regrets, there are only lessons.  You learn from them, and you become a better person.”  – Nicole Polizzi

Sauce:
The basic premise of the sauce is to mix soy sauce with acid (vinegar or lemon juice), sugar (or honey, agave nectar) oil (sesame, grapeseed) and spice (red pepper flakes, chile peppers).  You can also add herbs for flavor (cilantro, basil, mint).  I used the mixture below for the shrimp but try any combination you like.

Ingredients:
The beauty of stir-fry is that you can use any ingredients you like and whatever you have on hand.  I am quite certain I have never made stir-fry the same way twice.  Some favorites are chicken, tofu or shrimp with a variety of vegetables.

Once all ingredients are assembled, heat a wok or large saucepan to high heat.
Add 1 T oil and swirl to coat pan.
Add shrimp.  Cook for 1 minute and turn.  Cook 1 more minute and take pan off heat.  Remove shrimp to a bowl and stir in 2 tsp of jam or marmalade.  Set aside.

Add 1 T oil to medium/hot pan and add broccoli.  Stir for about 2-3 minutes or until you can smell the broccoli and it starts to soften.  Add mushrooms and cook for another minute or two.  Add carrots, bok choy and peppers and cook for a few more minutes until all vegetables are done to your liking.
Add prepared sauce to pan and stir.
Mix corn starch with water and stir into pan.  Cook one minute.
Return shrimp to pan and stir together until sauce is nicely coating everything.
Remove from heat and let sit 1 minute.  Stir and serve.