I was not always a fan of oysters.
Hubby’s father loves them and over the years he continued to offer them up hoping to get me to like them.  But on the few adventurous times I tried them, I thought them dull and mushy.

The closest I came to enjoying them was when our friend Julia Child taught me to shuck.  Julia had received a bag of oysters from a farm in Washington State and invited us to share them with her.  We sat in my neighbors kitchen and Julia, in all her wisdom, told me that it was technique not strength that opened an oyster.  Always an attentive student, I was excited to learn the mysterious trick of shucking, even if it was knowledge I didn’t really need at the time.  Actually, I couldn’t help but enjoy oysters while chatting and shucking with Julia, and while the oysters weren’t bad, I was still not a huge fan after that night.  It was over 10 years, and not many oysters later, that Hubby and I discovered Island Creek Oyster Bar in Boston and the world became my oyster,
pun intended.

One and Only Son was recruited to play soccer at Boston University, matriculating in 2011.
By the time he moved, I had only been to Boston three times in my life; the first was when I was living in New York in the 1980’s, then two more times to look at colleges.  Boston was a whole new place full of new restaurants to explore and I couldn’t wait to dig in.  It has a great culinary reputation and I was hungry!

One of the first places we headed was Island Creek Oyster Bar (ICOB).  Given my oyster aversion, the name did not endear me so it was not my first pick of restaurant.  But it was cold outside and it was next door to our hotel so I was willing to give it a try.  Fortunately for me they offered more than oysters, but Hubby couldn’t wait to try the oysters from their own farm just south of Boston; restaurants don’t get them any fresher than that!

Hubby’s enthusiasm encouraged me to give the oysters a try and I was not unrewarded.  Maybe it was the setting, maybe it was their freshness or temperature or whatever, but they were clearly, undisputedly, the tastiest oysters we had ever had.  I was hooked.  We visited ICOB so many times that first year, and ate so many oysters while in Boston to watch soccer games, that the owner gifted us with our own shucking knives.  Garrett is a friendly restaurateur who watches over his restaurants carefully and noticed our frequent attendance.  He was delighted that he got us so hooked on oysters that we were ordering them by the bag from the farm, delivered to California.

We weren’t the only ones hooked on the oysters.  When One and Only Son was between games and we were  in town, he would join us at ICOB for an oyster fest.   He is a big boy, and boy does he love oysters!  So of course, when he was home in California for the holidays, we decided we needed to throw an oyster party.  I ordered a bag of 100 oysters, got out the shucking knives, and taught my children to shuck, just like Julia had taught me.  That is the wonderful thing about knowledge; as useless as it may seem at the time,
you never know when it will come in handy!

Oyster night turned into quite an occasion.
We invited some special friends, our three children invited their friends, and we rented a trolley to take us all around town to see the Christmas lights.  We didn’t want to host a dinner for the 31 guests that could fit on the trolley, so we settled on an oyster and cheese bar, along with french champagne and crisp wines to get us in the holiday spirit.  What is more festive than bubbly and oysters around the Christmas tree?  Trolley night, resplendent in holiday lights, oysters on ice, and the cheer of good friends, was a highlight that winter of 2011.  And even though oyster farms have the ability to offer oysters year round, I like to save the pleasure of an oyster party for winter when my children are all home and the taste of the ocean seems like a special treat. 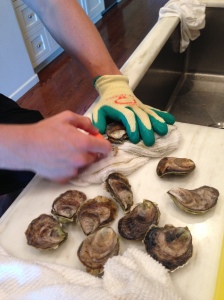 One and Only Son shucking.

After year one of the oyster bonanza, I decided that I wanted to know more about this oyster farming.
I came across the book Shucked: Life on a New England Oyster Farm and became fascinated by the farming process and it’s proximity to Boston. I decided that a trip to Duxbury was in order so I could get an up close look at Island Creek Oyster Farm (ICOF).  Hubby made the call and we were warmly welcomed to the magic that is oyster farming.

On a gorgeous September day in 2012, our hostess Michelle introduced us to CJ, our friendly and ruggedly handsome oyster expert and off we went…first to the indoor tanks where seeds are “sprouted” then off in a boat out to view the miraculous oyster-growing process.  The highlight, of course, was the oyster tasting out on the float in the bay where we were treated by a visit from Skip, the founder and owner of ICOF, along with his brilliant daughter and friend whose love for ocean life brimmed as they showed me the flounder they had caught and explained how both it’s eyes were on one side of the flat body.  They also caught lobsters and crabs and clams and knew more about each of these creatures than I ever learned in Marine Biology class.  Meeting these enthusiastic young girls was as much of a treat for me as tasting the oysters and learning about the special green crates identifying the “Per Se” oysters. 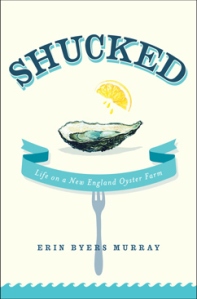 Per Se, a french phrase meaning in itself or intrinsically, is the name that Thomas Keller, of French Laundry fame, chose for his New York restaurant which opened to rave reviews in 2004.  Per Se was quickly considered one of the top restaurants in America, and now the world, and Mr. Keller takes ingredients very seriously.  So seriously in fact that Island Creek Oyster Farm has a special crate color for the oysters chosen to send to Mr. Keller for one of his signature dishes, Oyster and Pearls, which is served daily at both Per Se and The French Laundry.  These oysters must be a certain size and uniformity as well as depth of cup and shell smoothness.  Each Per Se oyster is selected by hand and placed in the special green crate before daily shipment to its final destination as one glorious bite of Oysters and Pearls, created to delight the senses and leave you begging for more. 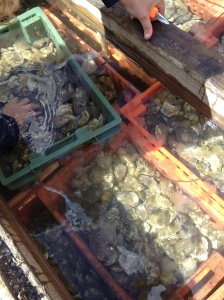 Fishing out a Per Se oyster.

I would not be so presumptuous as to try and re-create Oysters and Pearls.  With the amount of oysters that One and Only Son can consume, I would need the entire staff of Per Se to do it justice.  In my kitchen, we serve Island Creek Oysters, freshly shucked by the available hands of the day, on ice, with lemon wedges, and they never last long enough for the ice to start melting.  If we are feeling a little saucy, we offer a touch of jalapeno tabasco or a green chile sauce, to compliment but not mask the fresh ocean flavor of the oysters.  If we are feeling super saucy, we add a splash of vodka to the chile sauce before serving.  Saucy or not, we happily slurp away and give thanks to Skip and the crew for working so hard to keep the oysters coming. 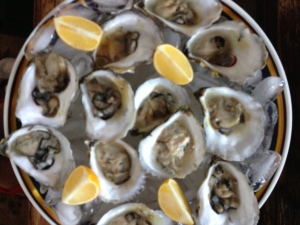 “He was a bold man that first ate an oyster.” – Jonathon Swift

Oysters, as fresh as you can get them (islandcreekoysters.com)
Lemons, cut into quarters
Shucking Knife
Crushed Ice
Green Jalapeno Tabasco or Spivey’s Spicy Green Chile Sauce

Fill a serving dish with crushed ice and shuck the oysters.
If you don’t know how to shuck, get someone to teach you or watch a video online and be careful not to shuck a hole in your hand!
Place the 1/2 shells open on the crushed ice about 15 minutes before serving so they get good and chilled. ( I like to set them on the ice and then put them in the refrigerator.)
Place the lemon quarters around the oysters.
Gather around and slurp away, squeezing a bit of lemon juice on the oyster if you choose and/or spooning a dash of sauce on top.

Put all ingredients into a blender and puree into a thick green sauce.  For extra saucy oysters, add the vodka to the sauce!