Kale.
How do foods suddenly come into fashion when they taste so bad?
It was sometime in 2011 when I starting noticing kale.  The superfood of the century had made it’s arrival and we were supposed to like it.
Well, I didn’t.
I tried to, believe me I did.  But raw kale tastes like tough, bitter, leather to me.  Hubby likes it baked into chips which I will do on occasion even though I am not a huge fan.  Olive oil, salt, bake it until it’s crispy and looks dead…it IS actually pretty good.  But I feel like it is kind of cheating on the superfood scale.  Is it actually a green vegetable when you cook it until it turns brown?
I kind of threw in the towel on liking kale.

Firstborn daughter didn’t give up so easily.  She lives in restaurant mecca New York City so she was seeing the kale revolution (Kalution?) in full force.  She grew up in a healthy household and we always ate freshly prepared foods so she had her work cut out for her to live a healthy lifestyle when she literally lived above a bar.  No Joke, her downstairs neighbor was  Wicked Willy’s. 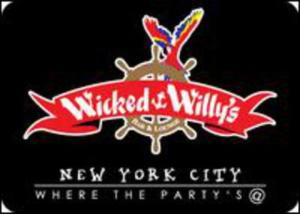 She lived over the bar. Oh yes she did.

But health was on her mind and so she started eating kale salads.
She was warming up to it, but not quite there, when she joined the family in North Carolina for Baby Girl’s birthday last February.  We went to a tapas bar and much to my surprise, Firstborn Daughter ordered kale salad.  (Yes.  You can even get kale in a tapas bar in the South.)  She said “I don’t really like kale but I feel like I need to add some health to our meal.”
Low and behold, it was good!
She got enough information out of the waitress to take home the idea and try it.
Good olive oil (1/4 cup)
lemon juice (1/2 medium lemon)
salt (1/2 tsp)
Toss kale with a heavy dose of dressing and leave to sit.  Leave it to sit was the key ingredient.

The next week she tried her experiment on the roommates.  She is a lover of avocado, not easy to afford in New York but occasionally worth it, so it was her go-to ingredient to make something tasty out of kale.  She prepared Anne’s Glazed Chicken, set it on her kale salad with some tomatoes for color and she felt healthy just looking at it.  Good news is that it also tasted great.

It was good…but I still wasn’t a kale convert.  I needed more.  The amazing MaryAnne stepped in again (see MaryAnne’s Girlfriend Party Salmon) and brought kale salad to dinner one night.  Her salad was really tasty and not just kale tasty.  The real kicker was that I put the leftover salad in the refrigerator because kale is so sturdy it doesn’t easily wilt so you can eat it as leftovers.  But I forgot it was there the next day and when I took it out a couple days later it was delicious!  Really delicious!!  A salad that is good, has major health benefits, and lasts for days…
now that is worth writing about. 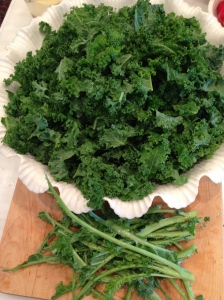 Put kale into a large bowl.
Mix together dressing ingredients and pour a generous amount over kale.  Using your hands, literally massage the dressing into the kale, adding more dressing until all the kale is covered with dressing.  Leave for at least one hour.
Toss kale with pomegranate, almonds and cheese.  Add more dressing if necessary to make the salad very moist.

Credit:  MaryAnne said the dressing (or close to it) is from The Sprouted Kitchen.