July 16, 2013 · by Cynthia Spivey · in From The Earth - Vegetables, Sides and Salads, Spivey Staples · Leave a comment

Sunday’s recipe that included roasted beets (Zucchini Pasta for Suzanne and Sheryl) prompted a few emails and texts from friends about roasting beets.  It made me realize that one of the things I love about cooking is that recipes can be created and altered in endless ways to suit our own tastes.  I thought I would offer up three different ways to roast beets so you can pick the one you like.  Or create your own and share!

“I follow recipes exactly – until I decide not to.”  -Ina Garten 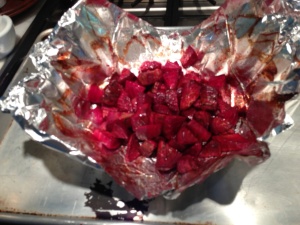 Preheat oven to 375 degrees.
In a large bowl, toss beets in olive oil, salt, thyme, juice and agave nectar.
Spread onto foil-lined cookie sheet in one layer.
Bake for 45-60 minutes or until beets pierce easily with a knife.
Remove from oven and fold up foil from edges so beets are in a pile in the center.
Toss the beets around in the juices a bit, unsticking them from the foil.
Let cool.

Preheat oven to 400 degrees.
Wrap each whole beet in foil.
Bake beets one hour for small to 1 hour 15 minutes for larger.
Remove from oven and let cool in foil.
Open foil and skins will slip off beets.
Slice and use as desired.

Maili’s Roasted Beets from The Silver Pen
(click above for the recipe with photos)
2 bunches of beets, (medium sized beets have about 3-4 in a bunch)
2 Tablespoons of Grapeseed Oil
1/4 teaspoon Kosher Salt

Preheat oven to 400 degrees.
Cut off the green leaves (the leaves can be used for a separate beet greens recipe).
Cut off bottoms and tops of the beets.
Peel beets with vegetable peeler.
Cut into 1″ chunks.
Put into bowl.
Add grapeseed oil and salt.
Toss together and spread on baking sheet.
Cook for a total of 45 minutes, tossing once halfway through cooking.
Can be served hot or cold.  They are delicious either way.
Serve and enjoy!