July 8, 2013 · by Cynthia Spivey · in Foolproof Favorites From Famous Chefs, From The Earth - Vegetables, Sides and Salads, The Main Meal · 3 Comments

A few years ago I was invited to an old-fashioned dessert bake-off as the guest of a participant.
Three amazing women in Santa Barbara decided that the time had come for the return of the bake-off, gathering a group of friends to submit their tastiest concoctions and compete for the prize.  When I arrived, I knew instantly that this was not my grandmother’s bake-off. 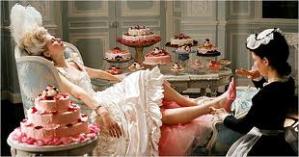 This is how I felt at the bake-off.

These women, originally from the South and Midwest, had taken an old-fashioned idea and brought it to glitz and glamour in the 21st century.  We were greeted with French Champagne and a ballot, while submissions were whisked away to a secret location.  When all the desserts had been beautifully displayed and labeled, the “reveal” happened.  And what a reveal it was.  The dining room table was resplendent with an array of cakes, pies, cookies, puddings and every other imaginable sweet treat!  While we perused the display and tasted, evaluated and salivated, we were offered “milk shots” from a silver server to “clear our palates” between bites.  Ahhh, what a taste sensation that afternoon brought. 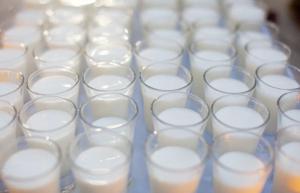 The following year I was invited to submit a dessert in the bake-off.  The privilege came with great pressure, having witnessed the display of the prior year.  I thought for weeks about what to submit and finally decided to try and recreate one of the best desserts I have ever experienced in my life.  Hubby and I were on a delayed honeymoon in France in 1985 and stumbled across a little restaurant/inn in Puligny Montrachet (Hotel Le Montrachet).  Our room was simple and the bathroom was across the hall but we were content with our choice because the restaurant came with high accolades.

The food was indeed sublime and the spectacular wine came in enormous crystal balloon glasses which made the whole restaurant pause and look when we were served.  But the star of the evening was the dessert, a chocolate mousse cake with a chocolate meringue crust.  It was so light and crunchy and delicious.  But it didn’t stop there.  Once the plate was served, a cart of homemade ice creams came by for me to choose my pairing.  I decided on the mint and I have never regretted that decision.  There are not words to describe the perfection of the fresh creamy mint with the delectable light chocolate. 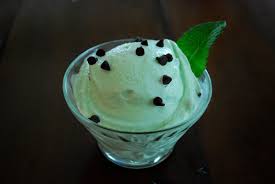 So when it came to my first bake-off submission, I decided to go chocolate and peppermint.  I searched the internet and my collection of cookbooks for something resembling the french chocolate and decided on a combination of ideas that I called Cynthia’s Chocolate Meringue Mousse Cake with a hint of peppermint.  I was extremely pleased with the results.  It wasn’t a simple cake to prepare (I’ve never made it again but the recipe is here) and it didn’t win the bake-off, losing to absolute perfection in a fresh peach cake (get the peach cake recipe here) that was submitted by a vivacious, blonde, professional chef named Maili.  She and I loved each others bake-off desserts and at the end of the event, we decided to split the remains, each taking home half of the others cake.  It was the beginning of a warm and wonderful friendship.  Maili and I share a genuine enthusiasm for our food and she is a cooking genius. 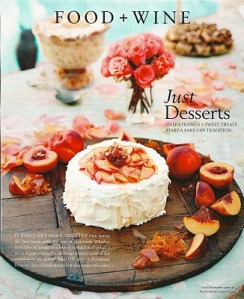 The following summer, Maili invited me to join her and some friends for an al fresco lunch at a farm in Santa Ynez.  Maili arrived with a car full of bowls, laden with amazing salads she had whipped up that morning in her tiny kitchen.  One of the dishes, an orzo salad served at room temperature and filled with a medley of delicious ingredients, was my absolute favorite.  I immediately thought of four or five upcoming occasions when I could use the orzo salad.  Maili said the recipe was on her blog and it was a breeze to prepare.  What an amazing bonus to an already perfect day! 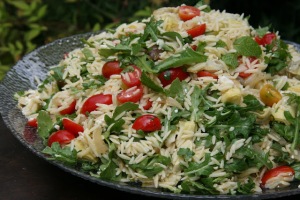 I made the orzo for many events that summer and fall, most importantly for the going away of One and Only Son.  He was leaving for college the summer I discovered the orzo salad and it was perfect for the send-off party of about 40 friends and family that joined us to wish him well.  It seems to be the perfect salad for almost any occasion and any time of year.  Thank you Maili, for your love of food and enthusiasm for friendship.

“If you really want to make a friend, go to someone’s house and eat with him…
the people who give you their food give you their heart.” – Cesar Chavez

Cook the orzo in boiling salted water for 9 minutes.  Rinse orzo until completely cool before adding other ingredients.
Saute onion over medium heat in 1/3 cup olive oil.  Put a pinch of salt on the onion while cooking.  Cook onion for 15 minutes, stirring occasionally, until onion is translucent and sweet, but do not burn.  Turn the heat down if it starts to brown so that you can allow the onions to cook for the full time
In a large bowl, toss the warm onions with the cooled pasta.  Be sure to use all the oil from the saute pan as it becomes the dressing for the salad.
Toss in arugula, tomatoes, capers, artichoke hearts, parsley, lemon juice and salt and pepper until well combined.  Gently toss in the feta and pine nuts just before serving.
This salad should be served at room temperature and it can be kept at room temperature for quite a few hours.  For optimal flavor, it is best not to refrigerate once tossed.

Credit:  This recipe is written for the way I prepare it.  To read the origins and variations of this versatile recipe, click here for The Maili Files.