June 14, 2013 · by Cynthia Spivey · in From The Earth - Vegetables, Historical Nonfiction, My Story - Why The Water Is Smiling, The Main Meal · 6 Comments

Restaurants were not a big part of my life growing up.  With five children, two of them hungry boys, restaurants were quite an extravagance for our family.  A big treat was going to Marie Calendar’s for dinner, where we probably went a couple times a year and I always had the ham stack, a sandwich filled with about two inches of shredded ham on toasted bread and I can’t believe my skinny little body could consume a whole one. I’m guessing Dad or my brothers must have helped me.  Brother Bill worked for a time at Marie Calendar’s and he was allowed to bring home the leftover pie at closing;  what a spectacular time that was for our family!  But I don’t remember that lasting for very long.

There was also a restaurant near our house which was a “fancy” place with tablecloths.  It wasn’t a chain and there was a huge fish tank at the entry; the restaurant is no longer there.  I must have gone about five or six times and I’m sure I never had anything but the Shrimp Louie.  So, with such limited restaurant experience by the time I was an adult, there were still many foods I had never tried simply because they were not in Mom’s repertoire of family-friendly meals.

Visiting restaurants during college, I was willing to try new foods and what wonderful things I found!  Fish and vegetables were my favorite new delights, eggplant landing at the top of the list.  I first tasted eggplant at a restaurant in downtown Santa Barbara called Chase Bar & Grill.  It still exists today, although I believe it is in a different location than it was all those years ago.  Hubby-to-be took me there on a date when we were college students in the 1980’s and I ordered eggplant parmesan.  I was an instant fan.

Over the years, we ate at Chase’s a number of times and I almost always ordered the eggplant.  On one of those date nights, Hubby-to-be brought some very special wines to dinner.  He worked at Brinks Vintage Shop and was frequently guided to memorable wines by Mr. Brinks, a lovely man who opened the first wine and gourmet food shop in Santa Barbara.  On this occasion he chose a 1969 Sterling Merlot and 1970 Sterling Merlot, which I held carefully upright during the drive there so they wouldn’t get jostled.  I was just learning about wine myself but I already had determined that I didn’t care much for Cabernets; at least not the Cabernets available to us on a regular basis.  Mr. Brinks had on occasion shared some of his treasured old French Bordeaux wines and those I liked.  But for the most part, Hubby-to-be knew I favored Red Burgundy, Zinfandel and my favorite, Merlot. 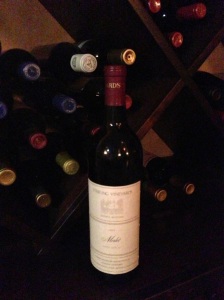 Parked at the restaurant, I stepped out of the car and before I could blink an eye, one of the bottles slipped from my grasp and fell to the ground, shattering it to pieces.  Hubby-to-be stood with his mouth agape, watching the liquid drain across the asphalt parking lot.  His only words were, “I hope that was the ‘69 and not the ‘70.”  I slowly and carefully handed him the other wine, still wrapped in its’ paper bag and he pulled it out.  He smiled, hugged me and said, “Well, if you had to drop one, that was the one to drop.”  You can understand why I married him just a short time later.

It wasn’t long after the parking lot disaster that we were engaged.  I graduated from college, moved to Texas where my parents were then living, and settled in with them for the few months prior to my New Year’s Eve wedding.  Recalling all the years Mom had cooked for me, I decided to cook my parents dinner.  Hubby-to-be was also there; we would all be living in the same town while he attended graduate school.  He bought some wine and I spent much of the day preparing my favorite meal, eggplant parmesan, with a recipe from Anna Thomas’ The Vegetarian Epicure, a cookbook gifted to me by my college roommates.

I served up my eggplant with flourish, adding a green salad to complement and waited for the accolades about what a great cook I had become. Dad finished eating in five minutes flat.  I asked him how he liked it and I’m sure he said he did because Dad was a kind and loving man.  But the part of his answer that I remember is, “It all just fills the hole.”  My spirits sank.  Food and food preparation was becoming very important to me and at that moment, I was embarrassed in front of my fiancé that this was my heritage.

I recalled that night many, many times over the years when people asked what my life was like growing up.  Hubby and I were serious about our food and wine; most of our friends were in the business or were dedicated food hobbyists.  Since I wasn’t one to reflect, and didn’t want to admit my lack of cooking skill, I just stuck to the basic answer that my childhood was very happy, never pontificating about my lack of culinary training or food sophistication.

It took decades for me to sort out why I viewed my childhood with contentment when I never received the basic training I deemed important as an adult.  And finally, after repeatedly hearing my kids explaining to their teenage friends that they would meet them later because they didn’t want to miss dinner with the family, it dawned on me.  It wasn’t the food that was important in my childhood; it was the gathering.  Sharing a meal with family is the soul of a happy life.  My parents gave me something that no recipe can match and of which I am so very, very, lucky to have received.  They gave me their time.

While I was eating six o’clock dinner every night at the kitchen table as a child, I learned what I needed to know about food; you eat it together, at a table, while you talk about your lives and stay connected to each other.  I can only hope that I have taught my children as well as my parents taught me.

Eggplant Parmigiana, from The Vegetarian Epicure

Wash your eggplant and, without peeling it, slice it about 3/4-inch thick.  Dip these slices first in flour, then into the egg, then into the breadcrumbs so they are well coated.  Saute them in a little olive oil, a few at a time until they are nicely browned on both sides; tend them carefully and add oil if it is needed.  When they are crisp and brown, arrange them in a baking dish and put a slice or two of Swiss cheese or Mozzarella on each one.  Make a thick tomato sauce by diluting the tomato paste with wine.  Mix the tomato sauce with the oregano, salt, pepper, and crushed garlic clove, and spread 2 to 3 tablespoons on each slice.  Finally, sprinkle the grated Parmesan on top of it all.  Bake at 400 degrees for about 15 minutes and serve steaming hot.